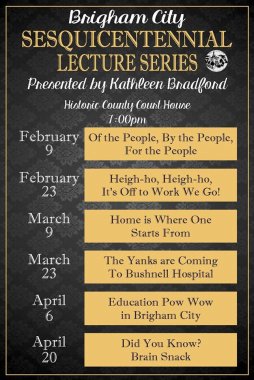 Historical Lecture Series (all at 7pm at the Box Elder County Courthouse):
February 9 Of the People, By the People, For the People
February 23 Heigh-ho, Heigh-ho, It's Off to Work We Go
March 9 Home is Where One Starts From
March 23 The Yanks are Coming to Bushnell Hospital
April 6 Education Pow-Wow in Brigham City
April 20 Did you Know / Brain Snack