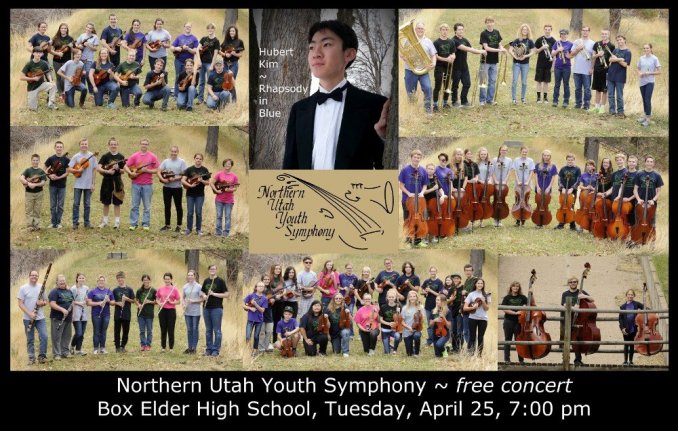 N​orthern Utah Youth Symphony and Chamber Orchestra will present their Season Finale Concert, Tuesday, April 25, 2017, at 7:00 pm. The concert will be presented at Box Elder High School Auditorium, 380 S 600 W, Brigham City. ​Admission is free thanks to our sponsor, PetsFirst! Wellness Center and a partial sponsorship from PR Instructional Design.

The 95-member Youth Symphony, conducted by Conrad Dunn, will continue the concert with medleys from Phantom of the Opera, Indiana Jones, and How to Train Your Dragon. They will also be performing George Gershwin's Rhapsody in Blue featuring Hubert Kim, Piano.

The Youth Symphony and Chamber Orchestra are projects of the Lake Bonneville Symphonic Society, a 501(c)(3) non-profit organization dedicated to offering a full symphonic experience to motivated musicians. Musicians include Jr and High School students from Cache, Box Elder, Davis and Weber Counties, as well as Bear Lake, ID.

H. Hubert Kim, 17, was born in Logan, Utah and is a senior at Lone Peak High School in Highland, Utah. His parents are originally from Korea. He has been studying piano since age six with Moragh Morrison and Miho Everitt (who studied under Jorg Demus) of Logan, Utah; Dr. Richard Anderson of Brigham Young University; and Marina Panin of Alpine, Utah. He has participated in various Utah State University Youth Conservatory functions, achieving success at the annual Youth Conservatory Piano Festival and the Audition Christmas Concert. He has also placed in the annual Keyboard Gymnastics Cache Symphony Orchestra Piano Concerto Competition, as well as the Northern Utah County Music Teachers Association festival, and has performed in the Noon Music Series at the Logan Tabernacle. He has performed with the Logan High School Philharmonic Orchestra as a school Concerto Night soloist. He has also achieved superior ratings on piano at Region and State-level UHSAA Solo & Ensemble festivals. Hubert has also played keyboard in the pit orchestra for the school musical for the past three years, as well as playing with the school jazz band. Along with piano, Hubert has also played the violin since he was eight, and has participated in the Mountain West String Academy Ambassadors group under Dr. James McWhorter, and has played in the Bridgerland Honors Orchestra. He is currently a member of the Chamber Orchestra at Lone Peak High School. Aside from music, Hubert has served on the Logan High School student government, and has been elected to a Student Body Officer position, enjoys skiing, table tennis, following sports, and listening to classical music.