Sights and Sounds of Brigham City

Santa Claus is Coming to Town! 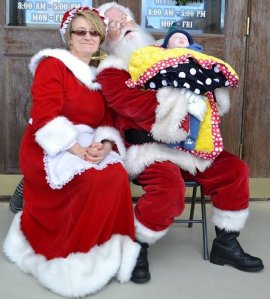 Santa will make is annual appearance in Brigham City on Saturday, November 30,  at 11:00am. The Wasatch Children’s Choir will perform from 10:30am until Santa arrives.

Kids 12 years and younger are invited to the Brigham City Recreation’s Breakfast with Santa, a part of the department’s Sights & Sounds

program, on Saturday, December 14, at the Brigham City Community Center, 24 North 300 West, at either 8 a.m. or 9:30 a.m. Space is limited, and tickets are available at event sponsor, Gillies Funeral Chapel, 634 East 200 South, beginning Dec. 3 at 9am. Tickets will be given out on a first come, first served basis until they run out. Anyone planning on attending needs a ticket.

Brigham City’s Gingerbread House Contest. Entries need to be delivered to the second floor of the Brigham City Hall, 20 North Main, on Monday, December 2, between 4 and 5 p.m. There will be three categories: Family (parents and children under the age of 18); Child (ages 8-17); and Adult (age 18 and older). Cash prizes will be awarded in each category, sponsored by Big J Milling Company. Rules for the contest are available at the recreation office, 641 East 200 North, or at the Senior Center, 300 West Forest. For more information, call 734-6608. The houses will be displayed at the Brigham City Christmas Village throughout December. 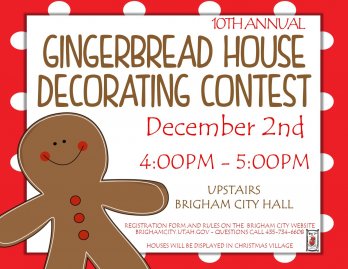 The Old Grist Mill is once again sponsoring the About Town Scavenger Hunt, which begins Monday, December 9, and continues through Friday, December 27. Several Brigham City residents have agreed to decorate their homes, to include items on the scavenger hunt. Participants can pick up an item list and a map at the Brigham City Recreation  Department, 641 East 200 North. Completed scavenger hunt lists should be exchanged at the recreation offices for a coupon good for a free cookie at Old Grist Mill.